Gratis binnen 30 dagen retourneren
Klanten beoordelen BookSpot met een
The story of Mulan, the young girl who joins the army to save her family and her country, is at least 1500 years old. Over the centuries, it has inspired dozens of poems, plays, novels, songs, and more recently, graphic novels, TV shows and films.

The details of the story vary, but the core is always the same: a young girl living with her family in a small Chinese village learns that the army requires each family to contribute one man to fight invaders from the North. To save her elderly father she disguises herself as a young man and enlists in the army; she excels at fighting, strategy and leadership and rises through the ranks; the war ends successfully; she is recognized as a hero and is offered rewards by the Emperor; she declines the rewards and humbly chooses to return to her family and take up the traditional life of a village woman.

This wonderful little book consists of just 30 six-line verses, and lets beginning students enjoy a great story while also learning to read Simplified Chinese. It is written in a 240-word vocabulary using fewer than 300 different characters. Proper nouns are underlined, and new words that are not in the HSK3 standard vocabulary are defined on the page where they first appear. Each page of Chinese also contains a pinyin (romanized spelling) version and an English translation. The pinyin is also useful for looking up word definitions in the glossary.

A complete audiobook version is available free on YouTube and can also be downloaded from the Imagin8 Press website.
Lees meer 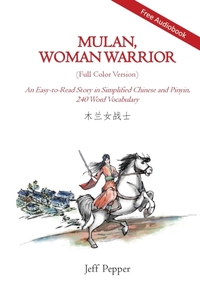